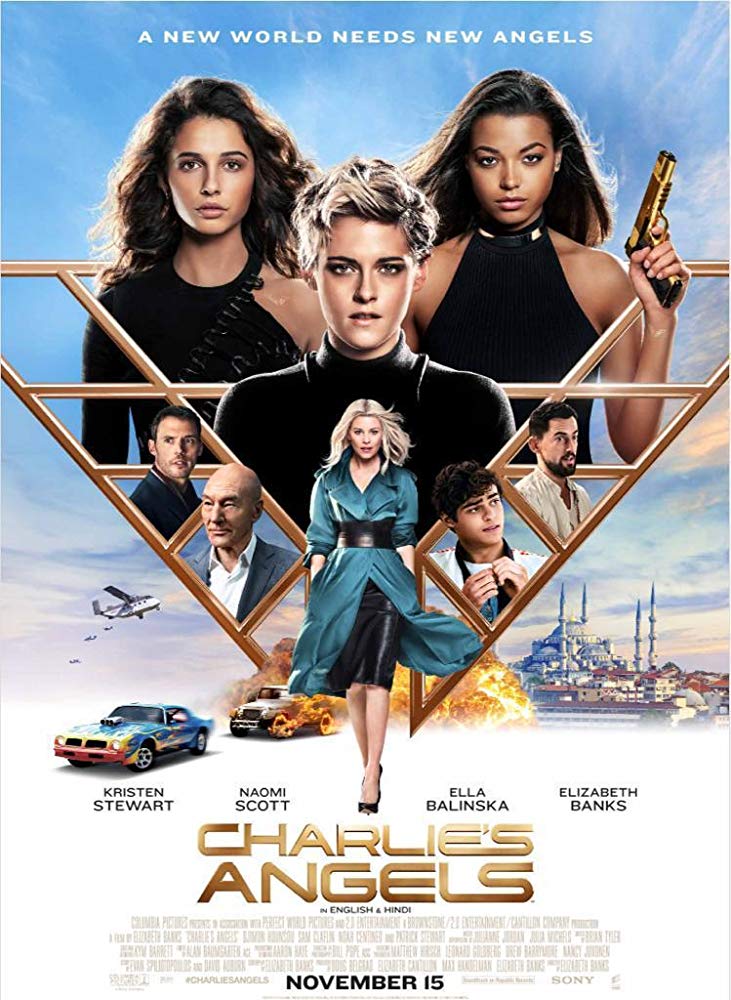 I would not have seen this Charlie’s Angels reboot if I wasn’t on a movie podcast (oh, and AMC A-list status). Nothing I saw ahead of time – the weirdly flat trailer, the awkward song, the cast of angels – drew me to this movie like the 2000 version. Sure, that movie was much more campy than the 2019 version, but it had a stand-out hit single ahead of the movie’s release with Independent Women (Part 1) and a cast of bankable stars (and Lucy Liu). It was flashy and loud and a little silly, but it was a massive hit garnering a less successful sequel that still went on to make $259M through its release.

I’m a 33-year old feminist who loves going to the movies. If the studio couldn’t convince me to see this movie … who was going to see it?

Prior to the release, director and star of the movie Elizabeth Banks said that men weren’t likely to see a female-led action movie, saying “If this movie doesn’t make money, it reinforces a stereotype in Hollywood that men don’t go see women do action movies.”

I think it’s unfair to write off the success of films like Captain Marvel and Wonder Woman. Whether she means to or not, Banks is essentially giving all credit to the men who created the cinematic universes. She is robbing the female stars and directors, along with the other cast and crew, of their role in creating successful female-led action movies. Lucy, Salt and Atomic Blonde have all been profitable action movies over the past ten years and weren’t part of an existing universe or a remake/reboot … which Banks’ movie is.

What made these movies different from this Charlie’s Angels is that they were sold as action movies (not “girl action movies” – there’s a difference) and heavily marketed using the star of the film. Scarlett Johannson, Angelina Jolie and Charlize Theron are bankable stars that can open a movie. Sure, they’re all gorgeous white women, but baby steps here, people …

Movies are products. Studios need to sell them. They will use what works – and what works are proven, profitable actors. Is that a fair system? No – but it’s what we’re working with right now. Ultimately, I think this movie’s “flop” status rests heavily on poor marketing from the studio, and questionable casting.

Naomie Scott is an up-and-comer with this year’s Aladdin live-action remake. But her role in the Charlie’s Angels team is also the newcomer. She’s not a spy when the movie begins. She’s a scientist facing an ethical dilemma at her job that turns into a wild adventure with assassins, thieves and the Townsend Agency. Casting a new face in that role actually makes sense. And, for the record, she was great in the movie. She was entertaining and earnest, funny and fierce. I expect to see lots of great things from her in the future.

But the other two angels needed to be bankable stars. Sabine is our goofy ground agent, using her charms and wiles to seduce and neutralize targets. Kristen Stewart gave a great performance and it was interesting to see her in such a different role than what we’re used to. But while having been a star of the incredibly profitable Twilight franchise, she isn’t exactly a box office powerhouse. She’s more known for her independent movies – and possibly her personal life – than for her ability to bring in the crowds.

Jane, our cold and clinical former MI6 agent, is played by Ella Balinska. Her wikipedia page is two sentences: “Ella Balinska (born 4 October 1996) is an English actress. She starred in the 2019 reboot of the Charlie’s Angels franchise.” There’s nothing more to say about Balinska. She was fine in this movie, but her character seemed underdeveloped. I wouldn’t be surprised if we found out a lot of her part had been cut out.

So let’s play Screen Fixer here and fix the casting!

Hailee Steinfeld was a delight in her one scene (during the credits) as an angel recruit. She would make a perfect Sabine. She’s funny, beautiful, charming and absolutely carried last year’s Bumblebee. Oh, and she can sing. She could have been part of the Ariana Grande/Miley Cyrus collab (sorry, Lana – you make no sense in this song) and it would have been a slam dunk of movie marketing.

Zendaya would have killed it as Jane. She’s got a better deadpan, weirdo vibe as MJ in the recent Spider-Man movies, and I would actually believe her as cold and detached, as the movie wants us to think Jane is. Balinska seemed too nice! She didn’t seem cold – just British. Zendaya, on the other hand can balance weirdness with toughness. She’s drawing eyes – and praise – to her turn on Euphoria and helped make The Greatest Showman a hit, despite that movie being mostly garbage.

Hailee Steinfeld, Zendaya and Naomie Scott. With original film angel Drew Barrymore as Bosley (thanks, JC!) … tell me how you miss that movie? You don’t. That’s a box office hit women and men will throw their money down on.

1 thoughts on “Why Didn’t Anyone See Charlie’s Angels?”