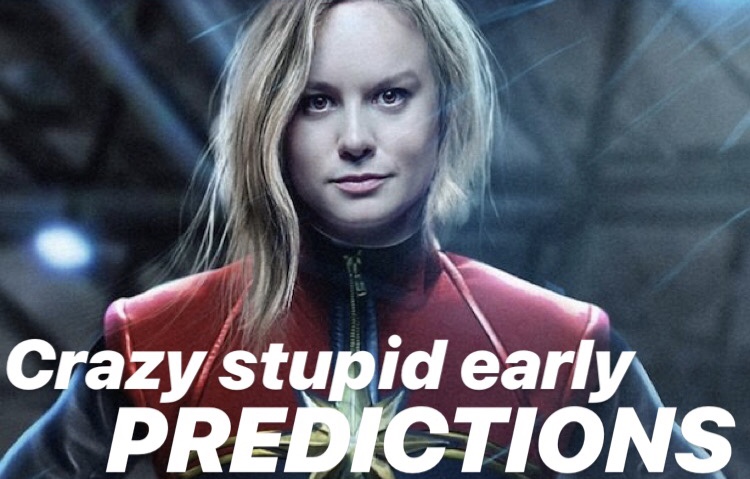 Here at Screen Fix, we can’t get enough of the Marvel Cinematic Universe. The studio blew us all away with Avengers: Infinity War (which we fixed previously on the pod – you can check out our fixes in Episode 22 starting at 31:00). But, then, Marvel had the audacity to ask us to wait nearly a year for the next MCU installation! While we’re not-so-patiently waiting, JC, the Lady-Wan and guest host (and Marvel trivia champ!) Kool-Aid gave our crazy stupid early predictions for Captain Marvel:

After two trailers, I was really worried that Brie Larson’s direction was that she is an unbeatable, brainwashed alien, and so Brie was like “Oh cool, so I have no emotions? So I’m going to speak really flatly.” However, from seeing the “Captain Marvel Special Look” that aired during the College Football National Championship Game, I’m so relieved! It seems like Carol Danvers has some spark to her personality after all. I loved seeing her in action and laughed out loud at how she made fun of the attempt at being covert while wearing S.H.I.E.L.D. hats, essentially “inspiring” all future plain baseball cap and sunglasses that Avengers in hiding will be wearing. I want this movie, though, to really feel like the 90s. Inhabit that world! Do the things that you can’t do in movies anymore because we all have cell phones. Take me back, Marvel!

Correcting Nick Fury with the term “hero” feels very accurate to her being from the military. You’re indoctrinated. You know the lines. You deliver them. The training montage does seem accurate as well, aside from how much she falls down. Her mohawk helmet was cool, and made me think of another Cree (warrior hero): Gladiator. He’s a badass. He put Juggernaut on his ass … he threw him across a river! I’m hoping he might show up and just destroy shit. Also, it seems like Carol’s cat, Goose (named Chewy in the comics), is definitely an alien. That cat is in the trailer for a reason. I’m hoping we even get to see some poisonous tentacles and teleporting from Goose.

I preferred Captain Marvel Trailer #1 to #2. The first one started so strong with the crash into the Blockbuster store. It grabs you and takes you immediately to the 90s. I’m disappointed that after two trailers, we still haven’t gotten a kickass 90s song! Thor: Ragnorok killed it with the use of Led Zeppelin’s “Immigrant Song” and, of course, both of the Guardians of the Galaxy movies use music so well throughout – so how do you drop the ball on just using an awesome, classic 90s song in this trailer? Captain Marvel Trailer #2 doesn’t feel like the 90s at all. Give us the 90s nostalgia, please! Maybe Pearl Jam’s “Alive” as we see Carol getting up from her many falls? Maybe 4 Non Blondes “What’s Up?” since Carol doesn’t know who she is? Maybe some Alanis Morissette since we’ve got a strong female lead? Since Marvel’s not giving it to us, I’m going to give it to you. Here it is: JC’s Captain Marvel Hypothetical 90s Nostalgia Soundtrack.

We’re counting down until Captain Marvel comes out, but in the meantime, what are your crazy stupid early predictions? Leave them in the comments or tweet us @screenfixpod!